The Battle With Balloons

When you think of a balloon, what comes to mind? If you are like most, perhaps you think of a birthday gathering, graduation ceremony, or another exciting celebratory event.

As a child, I used to look forward to coming downstairs on my birthday to find a room filled with a dozen brightly colored balloons – all twirling near the ceiling just for me. However, now I find myself concerned each time I see one of these helium-filled decorative items.

I remember clearly when these feelings of concern first began. I was working as a Naturalist with the Ritz Carlton in Dana Point. During our public whale watching tours, I would notice at least one deflated balloon (if not more) floating out in the ocean. I began to wonder where each deflated piece of mylar or latex came from.

Was the balloon accidentally released at a birthday party, a graduation, or maybe just a family gathering? Perhaps it was no accident at all, but rather intentionally released from a small child’s excited hands. Did it land softly in the ocean after traveling miles or did a heavy wind from the nearby coast send it crashing down into the sea?

Regardless of its humble beginning, I finally found myself feeling extremely frustrated that it was left to carry out the remainder of its long life in our ocean. Despite engaging with guests, I couldn’t help but to also watch the collapsed balloon drift by as dolphins, whales, and seabirds danced around us.

Did these precious animals know the potential danger that the shiny balloon in the water posed? No, and how could they? Were they responsible for its remnants being left to drift around in their homes? No, but we are.

Now, you may be asking, “I didn’t release the balloon so how am I responsible?”

If so, ponder the following questions for a moment: How many other balloons have you released accidentally or purchased and given to a friend who may have done the same? Because with each balloon that innocently drifts off, there is an increased likelihood of it ending its life at sea.

Now, I am not saying that enjoying balloons is inherently wrong, but I am suggesting that an alternative to these commonly used celebratory single-use plastics can be found. It is my hope that once you further understand about their economic and environmental effects, perhaps you too will desire an alternative.

Why Should You Care?

Before I explain some of the problems that balloons can cause, allow me to briefly share about the two different materials that they are made from.

Although considered “bio-degradable:, laytex balloons will take anywhere from 4 months to 6 years to completely degrade. That leaves a whole lot of time for them to enter into storm drains, litter the streets, fall into the ocean, or end up in the stomach of an animal. In fact, one study shared by the Environmental Nature Center found that balloons floating in seawater deteriorate at much slower rates and retain there elasticity, even after 12 months. Outside of the balloon itself, the string they are usually attached to also possess a direct threat to wildlife – both terrestrial and marine species.

This shiny material is definitely not bio-degradable and is made with a metallic material originally designed for use with the US space program. These are the type of balloons that are often made into big numbers, letters, or shapes of unique kinds. Because of their metallic nature, mylar balloons are capable of causing power outages, fires, and other dangers when coming into contact with power lines and electrical currents.

In fact, mylar balloons have posed such a threat to electrical poles and communities that California (among many other states) has enacted a law banning their release into the air. How about that? This law also includes that mylar balloons must be tied to individual weights to prevent them from floating away freely or in large groups. Because as Southern California Edison has shared, for the third straight year there has been a record number of metallic-balloon caused power outages in California – with 1,094 alone last year. (Click the last link to see one causing extreme damage to a power line.)

Now, besides their direct safety hazards to humans; balloons of both latex and mylar material are also very dangerous to wildlife, our oceans, and our environment.

“At best, free-flying balloons become litter; at worst, they jeopardize wildlife. Once airborne, they can travel far afield and often end up joining the flotsam riding the world’s oceans. One that was unleashed in a science fair experiment to investigate wind direction was retrieved on an island 1,300 miles from its release site. The National Oceanic and Atmospheric Administration identifies balloons as a commonly reported source of marine debris.”  – Eileen Andreason, Audubon

Balloons that end up floating in the ocean can be eaten by various marine animals and pose direct threats to their safety. For example, scientists have found numerous animals entangled in the string of balloons or deceased from consuming the indigestible material. Additionally, balloon pollution contributes to the North Atlantic Garbage Patch floating about 100 miles off of our coast. This is an area of our ocean that is filled with litter that has not yet or will not biodegrade over time. Sadly, scientists have recorded over 1.9 million small bits of plastic per square mile in one of our ocean’s “garbage patches”.

“About 80% of the debris in the Great Pacific Garbage Patch comes from land-based activities in North America and Asia.” – National Geographic

Now if this doesn’t encourage you to reduce, reuse, and recycle – I am not sure what will. And yes, one person can make a difference.

While I am deeply saddened by the below images, I believe sharing them will increase the likelihood of a cultural shift away from single-use plastics – such as balloons. The images can remind us of how serious a threat needless balloons are to ecosystems, as well as the choice we each have in preventing such dangers. 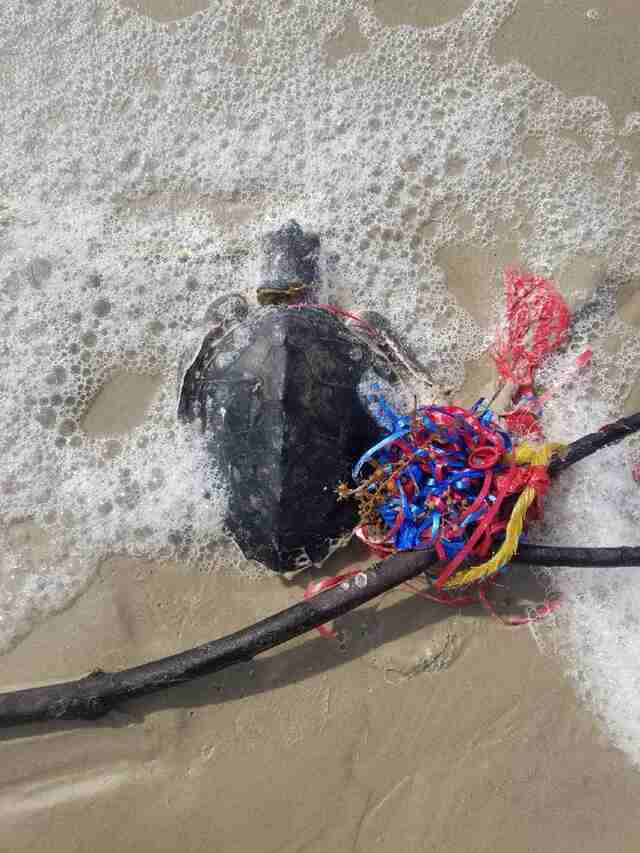 However, should you still choose to use balloons – here are some tips on ways to efficiently discard them:

Having now read this post, I encourage you to instead start a new celebratory tradition that does not involve balloons! Consider using flowers or edible arrangements as center pieces/gifts at events. Start a new tradition of planting a flower in your garden or elsewhere to commemorate a special anniversary or birthday. Use the “balloon money” to instead add to a gift.

And perhaps, go a little above and beyond to share your reason for avoiding balloons with guests! After all, the ultimate gift we can give each other is a healthy planet filled with beautiful wildlife. We are fortunate to have the ability to celebrate life – and we should absolutely not stop doing so. But lets find an alternative to balloons.

Thank you for reading,

Photos of the journey

The farthest point of the African Continent. Where the Atlantic and Indian Ocean meet.

You can’t hear it but he is purring away.

one of the servals here

Deep in thought. I loved this safari. Our guide was so smart and I learned a lot about land management for conservation.

One of Jake’s amazing shots.

If you look closely you will see Wildlife Warriors on there! Steve’s foundation.

Look closely in the middle…. on the loose!

Teaching the little ones.

yes, ostriches on a beach.

one of the amazing sunsets.

Baboons on the road!

I love these bat eared foxes

they all wanted to take pictures with us.. so weird.